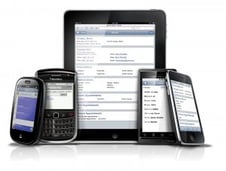 Put this picture in your mind’s eye – It’s a beautiful sunny weekday and you’re sitting by a pool catching the sun’s rays and a cool breeze.  Strategically placed within arm’s reach beside you is some kind of fruity drink with a tiny bamboo umbrella in it.  You are working (yep, I said working!).  You punch in the last financial figures into your iPad and check your calendar to see it’s time for the board meeting, which you dial into using your smartphone.  Alright, truth-to-tell, you’re more apt to be using your mobile device while waiting on a line at the bank than sitting by a tropical pool, but the basic point is the same – mobile devices mean freedom for employees.

It’s no wonder mobile devices are increasingly being adopted as essential business productivity resources.  No longer are employees tethered to their desks in order to use bulky IT resources.  For businesses, the move towards greater mobility means improved workforce productivity, which translates into improved profitability, so increased adoption is to everyone’s advantage.

…and adoption has been spectacular!   We recently released extensive primary research on the topic of mobile devices and mobile device management (http://bit.ly/mOOK5u) and found a staggering 70% of all US workers currently employ a smartphone or tablet to achieve job requirements.    Dominating the adopted platforms are Android and iOS devices, and the primary business uses for the resources is email access, web access, and calendar scheduling.

When reviewing the full research results, we were amazed by the breadth of mobile use today.  For instance, 28% of current business mobile device users indicated they were utilizing some form of virtualization (both desktop and application) on their unit today.  That’s a much larger number than we initially anticipated for a technology that is just emerging.

Despite the aggressive adoption of enterprise mobile device use, we’re only experiencing the beginnings of the mobile revolution.  Tablet devices, in particular, are a very young technology (with the iPad introduced just 18 months ago) and offers a platform that is poised to replace traditional desktop and laptop PCs.  Emerging technologies such as virtualization and cloud service are evolving in conjunction with mobilization to revolution how we think of personal computing.  Consider a world where applications are hosted in the cloud, delivered via virtualization, and accessed on mobile devices. Just the idea definitely calls for a fruity, bamboo-umbrella’d cocktail or two.

Now pass the lotion, will you – I’m starting to burn on this side…