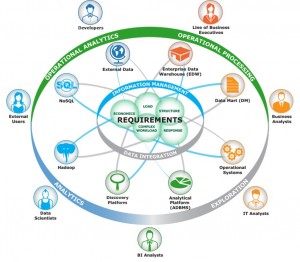 Enterprise Management Associates (EMA) has recognized that big data implementers and consumers rely on a variety of platforms to meet their big data requirements. These platforms include new data management technologies such as Hadoop, MongoDB, and Cassandra, but the collection also includes traditional SQL-based data management technologies supporting data warehouses and data marts; operational support systems such as customer relationship management (CRM) and enterprise resource planning (ERP); and cloud-based platforms. EMA refers to this collection of platforms as the Hybrid Data Ecosystem (HDE):

When I started out in security, only very large organizations with a mature set of business processes dared to talk about implementing some form of governance, risk, and compliance (GRC) or enterprise program (e-GRC). They generally did it in an attempt to get ISO or similar certification, or to “move their programs to the next level,” and some, I think, attempted it just to prove they did it. Many of those efforts were monumental, costing millions of dollars and taking years to complete. However, a significant number seemed to end in compromise, yielding a smaller end result or totally failing after thousands of man hours and millions of dollars for software, systems, and consulting had been spent.

Data Management: In-Memory Could Be the Mother of All Wisdom

As I review my series of #100linesOnBIDW blogs over the last couple of weeks, I found myself looking at the Data Management posting. I covered when to apply schemas, Big Data, and data governance. What I left out was technical implementation concepts for data management systems like row vs. column orientation; in-memory vs. spinning disk primary storage; and symmetric multiprocessing (SMP) vs. massively parallel processing (MPP). Processing and storage were the “developments” of 2012. I left 2013 for the “how to use” Data Management platforms.

Data Management in 2013: Warning of the Big Data Wolf

When Aesop created the fable about the shepherd boy who cried wolf, the message was clear: