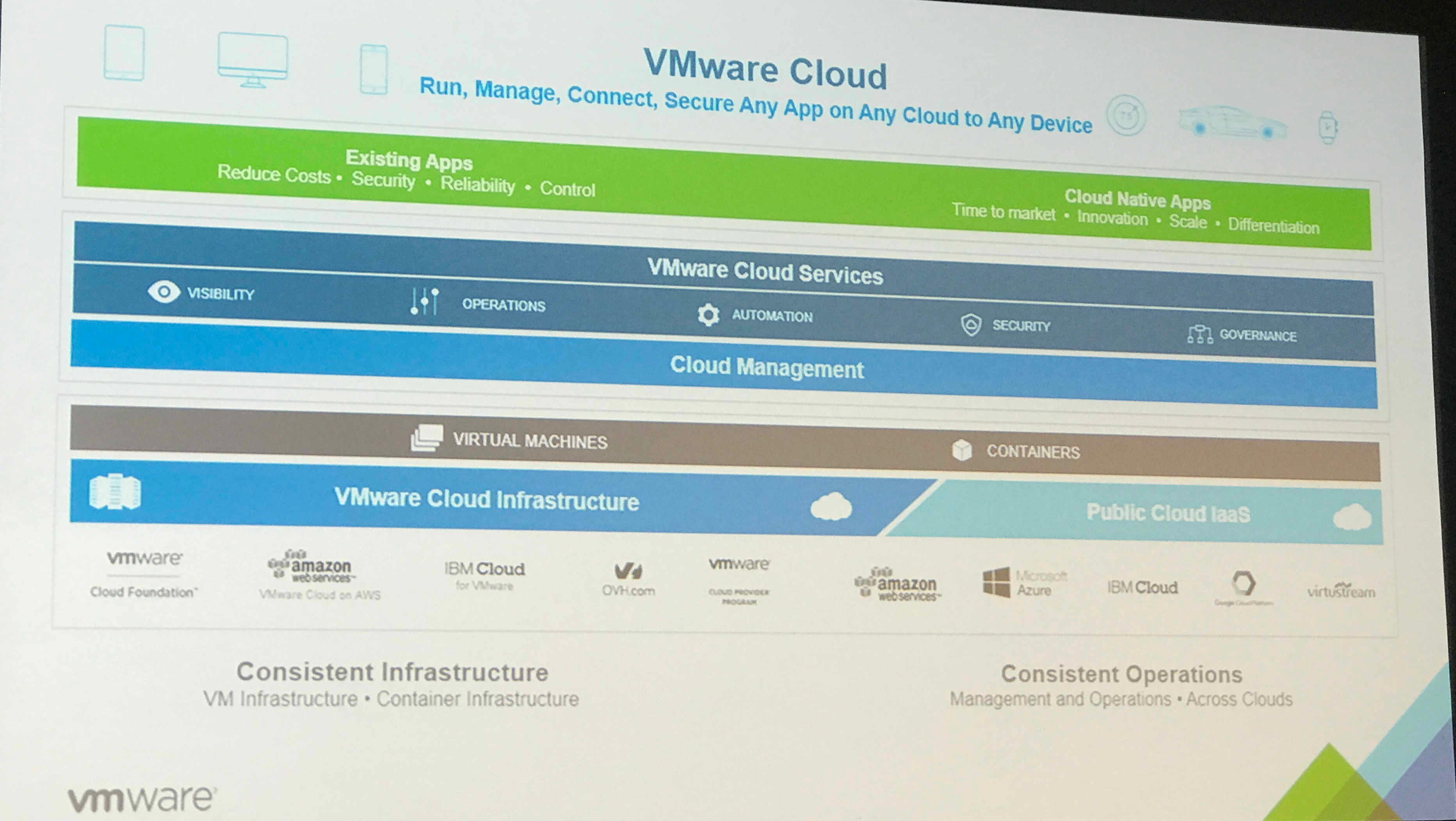 Answering the Key Questions on VMware on AWS Upfront

“VMware Cloud on AWS offers all the SDDC enterprise capabilities from VMware along with everything customers like about AWS.” This is how Mark Lohmeyer, VP Product at VMware sums up the value proposition of VMware and Amazon’s joint hybrid cloud offering. VMware on AWS is provisioned on “elastic bare metal.” This implies that VMware and Amazon created an infrastructure automation platform able to respond to ad-hoc requests for  compute, storage and network resources managed by VMware’s three SDDC products: vSphere, vSAN and NSX. The service is sold, operated and supported by VMware, so that there is only one throat to choke. From an architectural perspective, the local instance of VMware vCenter connects to the vCenter instance on AWS. The joint environment can then be managed as one entity through VMware’s vRealize Suite or through other operations management and automation tools. Partner solutions for DevOps, migration, costing, network & security and Data Protection will all work on VMware Cloud on AWS. 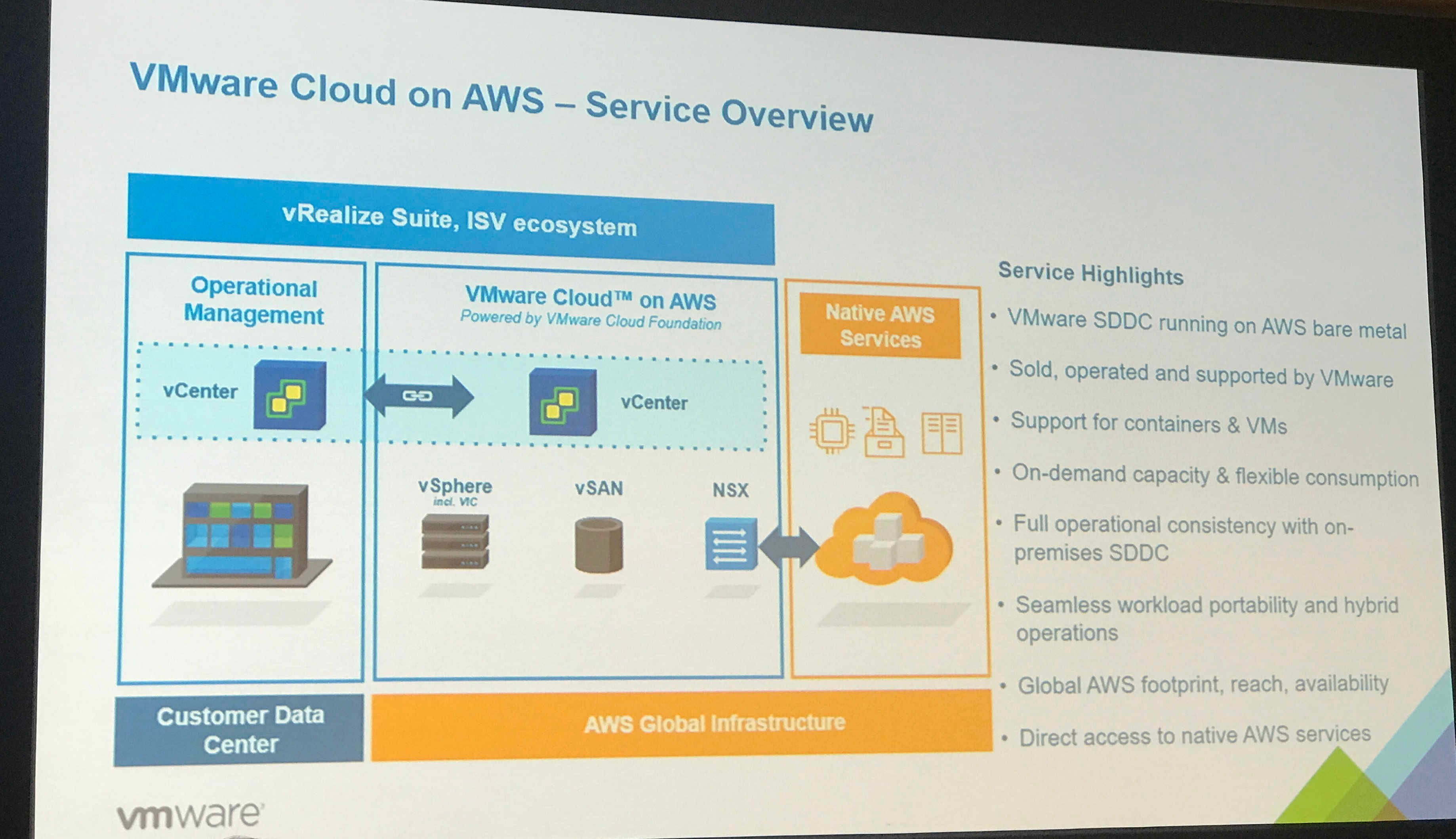 Here is a collection of the most asked questions since last VMworld and their answers:

Question: When I move my applications to VMware on AWS, will there be additional networking charges for me to use AWS native services such as Lambda, RDS or Aurora?

Answer: The answer is “no." once the application runs on VMware on AWS, access to other AWS services will not incur any charges for data traffic.

Question: What will the network speed between VMware on AWS and other AWS services be like.

Answer: VMware and Amazon promise fast low-latency connections between VMware Cloud Services, VMware on AWS and native AWS services, as all of these elements are collocated in the same Amazon data centers.

Question: Which vSphere applications will run on VMware on AWS and which ones will not run?

Answer: All vSphere workloads will run the same way on AWS as they currently run in the corporate data center.

Question: How do I buy VMware on AWS resources?

Answer: Resources can be purchased on-demand or with a commitment of 3 or 5 years.

Question: Will containers work on VMware on AWS?

In addition to these 6 new Cloud Services, VMware released the LogIQ service in beta mode. LogIQ offers log analytics as a service for trouble shooting and root cause analysis. Out of the box, LogIQ can be used for VMware’s suite of SDDC (vSphere, vSAN and NSX) products and it can receive data from the other VMware Cloud Services such as Discovery, Wavefront and Network Insight. LogIQ can be used in “simple” mode or with advanced machined learning added. VMware announced support for apps and infrastructure on AWS, Azure and Google Cloud. Users can create their standard queries and alerts through a visual frontend that enables browsing and auto completion within VMware’s SDDC object model.

VMware Cloud Services are available as pay per use or commitment-based pricing models. The latter offer discounrts of 30% for a 1 year commitment and 50% for 3 years.