“It feels like magic but it is technology,” and “we will help transform every company into a software company,” were the two quotes by Michael Dell that best summed up the spirit of  Dell EMC World 2017. These statements show the genuine excitement of a seasoned tech executive to attack the next challenge of his career: merging the Dell EMC brands -Pivotal, VMware, RSA, SecureWorks, and Virtustream- into one highly differentiated IT powerhouse.

Before the deep dive, let's take a look at a brief summary of the key announcements:

PowerEdge 14g: 0-touch infrastructure provisioning: OpenManage Enterprise and the new iDRAC 9 are a big deal and exactly aligned with Dell EMC’s ambition of fully automating the data center to make it ready for today’s consumption based model of enterprise IT.

Virtustream Healthcare Cloud: It is a big deal when Dell EMC as one of the large IT vendors launches its first dedicated vertical cloud. This is exactly what happens with Virtustream's Healthcare cloud and indeed, this is a big deal, especially as we can expect more from where this one came from.

VDI Complete: VDI complete is a turn-key VDI offering based on VxRail, Workspace ONE and AirWatch.

PC as a Service: In the spirit of Dell EMC focusing on consumption-centric IT, the new PC as a Service offering enables customers to pay monthly for desktops or notebooks.

Storage: "Smaller, faster, software defined": This could be the motto for this year's storage announcements at Dell EMC World. That said, Nautilus (software defined streaming analytics) and REX-ray (persistent storage for containers) stood out of the crowd.

While there is much work left to do, Michael Dell and the entire Dell EMC company have come a long way from a hardware vendor, with a failed venture into software, to a firm that lives and breathes digital transformation. Especially Michael’s ability to admit that success is basically impossible if you are afraid of failure, makes this new strategy credible. 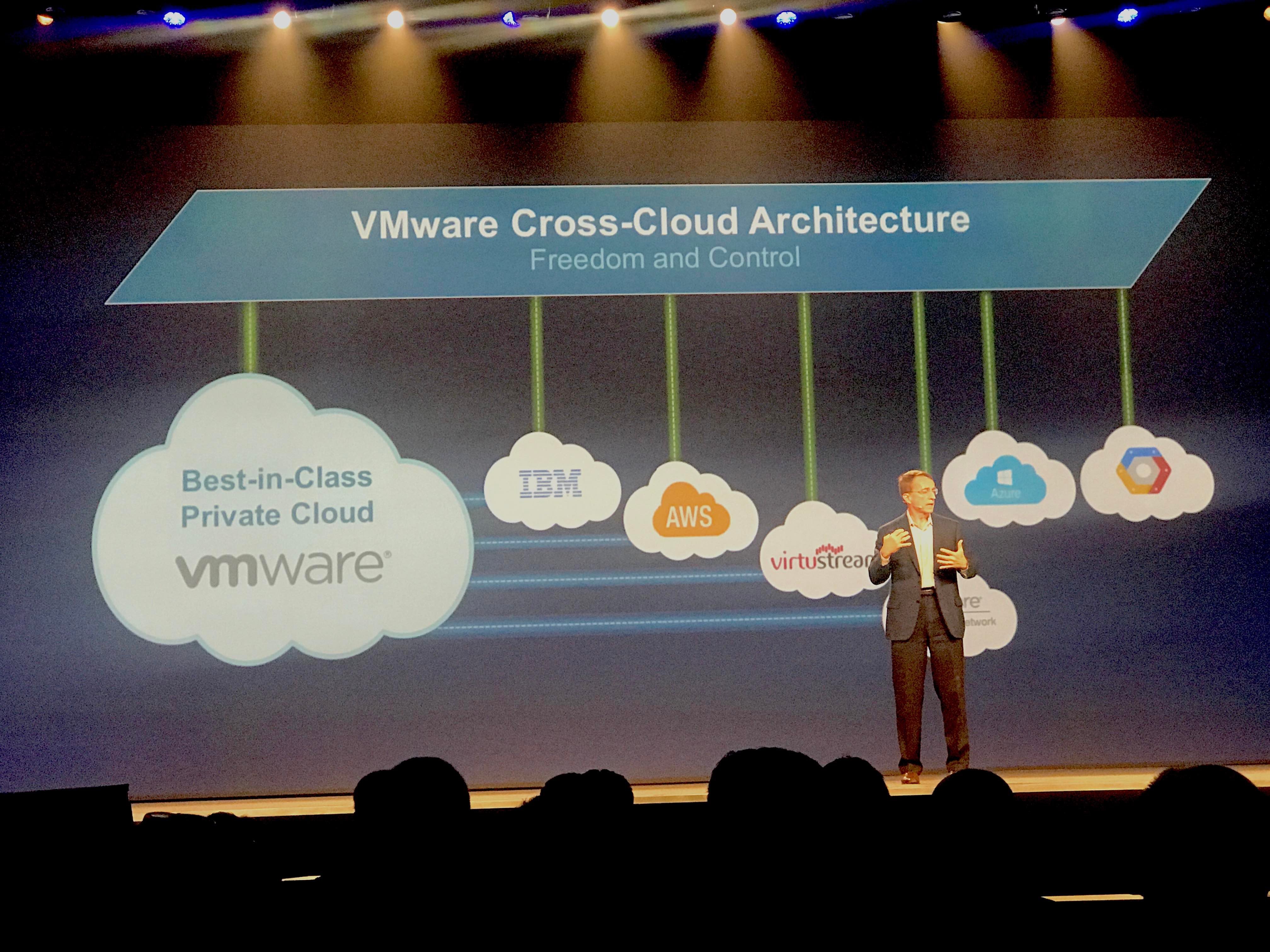 Pat Gelsinger in front of the AWS Logo - Who'd Have thought We'd See the Day?

When Michael Dell said during his keynote that “we [Dell EMC] will sell you everything from virtual reality to servers and storage I was immediately thinking “lock in.” But then I saw Pat Gelsinger on stage showing a joint demo of vSphere on AWS together with a real Amazon executive. The demo looked great and this was the first time that I have seen VMware’s CEO credibly talk about truly hybrid cloud, without the connotation of “you can do hybrid, as long as everything runs on VMware.”

Digital Transformation describes the process of organizations leveraging the latest technologies to permanently enhance their value proposition and the internal efficiency required to rapidly and proactively adjust this value proposition based on current and future market requirements. This requires IT to spend less on keeping the lights on and more on innovation. Transforming corporate IT into a lean mean innovation engine requires flexibility, agility and service-centric automation. EMA research has shown that the automation deficit in most organizations sits at the root of the majority of failed IT Transformation projects. For example, OpenStack deployments failed to show ROI simply because there was too much manual work involved provisioning, configuring, scaling and updating the underlying server, storage and network infrastructure.

It’s all about the Easy Button

Dell EMC World was all about the Easy Button, leveraging automation to do the dirty work, while customers receive near turn-key solutions to start continuously enhancing their value propositions. 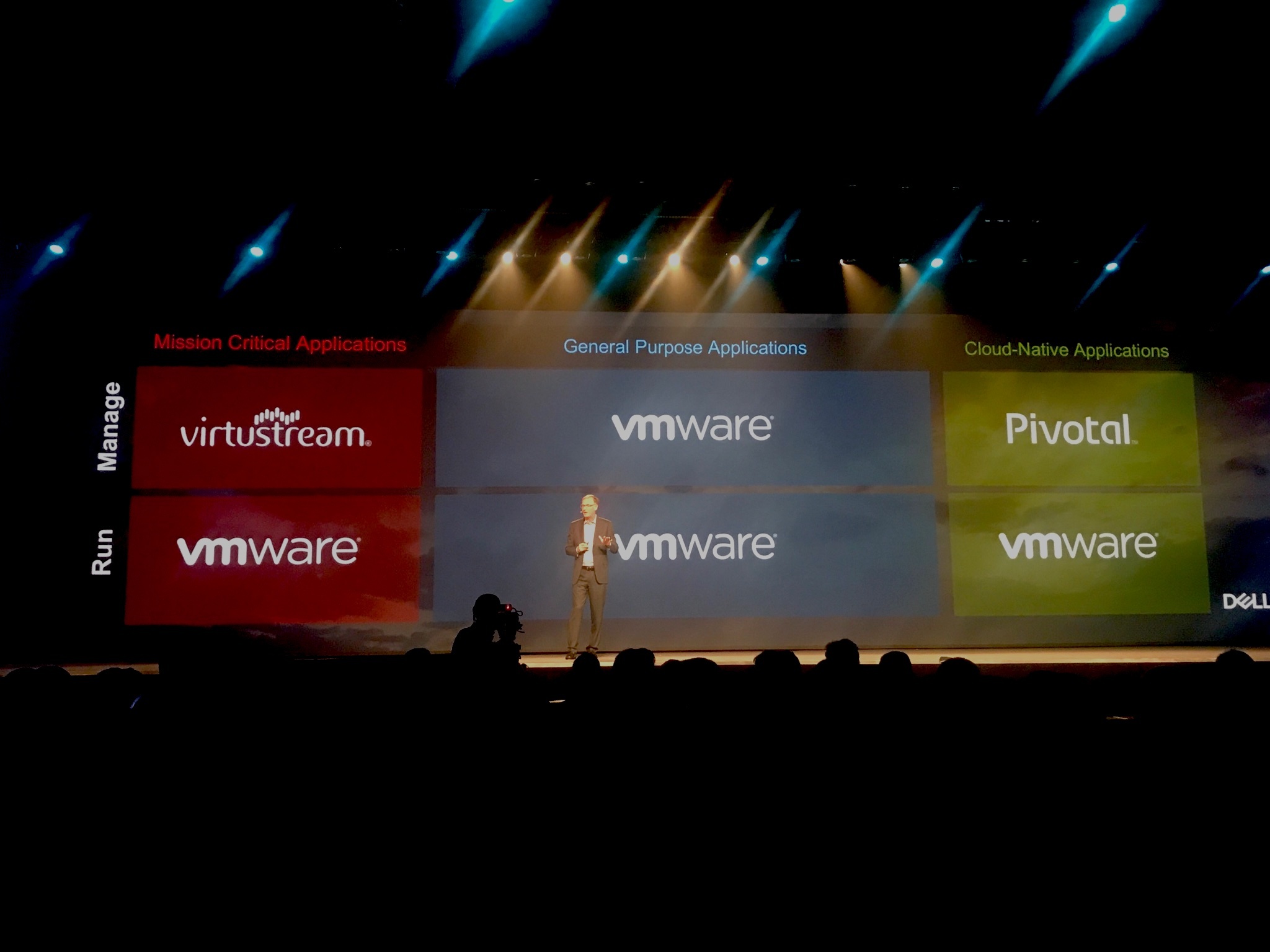 Dell EMC's framework for transforming IT toward a hybrid cloud model with on and off premise components.

Dell EMC World 2017 was focused on demonstrating to customers that the company is laser focused to provide an Easy Button to its customers to rapidly implement this consumption based hybrid cloud model within their enterprise. Let’s review the key announcements, based on their individual and collective impact on IT Transformation.

It’s been a while since anybody got excited about servers. For me, PowerEdge 14G is excited and this is not because of the machine learning-driven cooling and the resulting density increase or because of the performance gains through the use of Non-Volatile Memory Express. I’m excited about the zero-touch bare metal deployment that comes with the new OpenManage Enterprise. OpenManage Enterprise will gradually replace OpenManage Essentials and is Dell’s way of doing scale out the right way. OpenManage Enterprise follows a clean approach of treating servers like cattle, by abstracting all deployment, configuration and monitoring activities from the individual hardware boxes. BIOS, NIC, RAID and hypervisor provisioned and managed in a policy driven, automated and fully role-based manner. To make this happen right when the new server is plugged in, Dell EMC added a new out of band IDRAC 9 (remote access card) that is now able to automatically install servers, including OS and hypervisor, without leaving any manual tasks to the administrator. So no more PXE boot. When an administrator actually feels the need to visit the servers in person, the new mobile app serves as a console screen, identifying servers via BLE and NFC. Admins can use this app to assign an IP pool, wipe the server or sign up for alerts. The screenshot shows the nice new GUI that will initially only display events and alerts, but should soon also offer auto remediation, similar to what is available in OpenManage Essentials today. 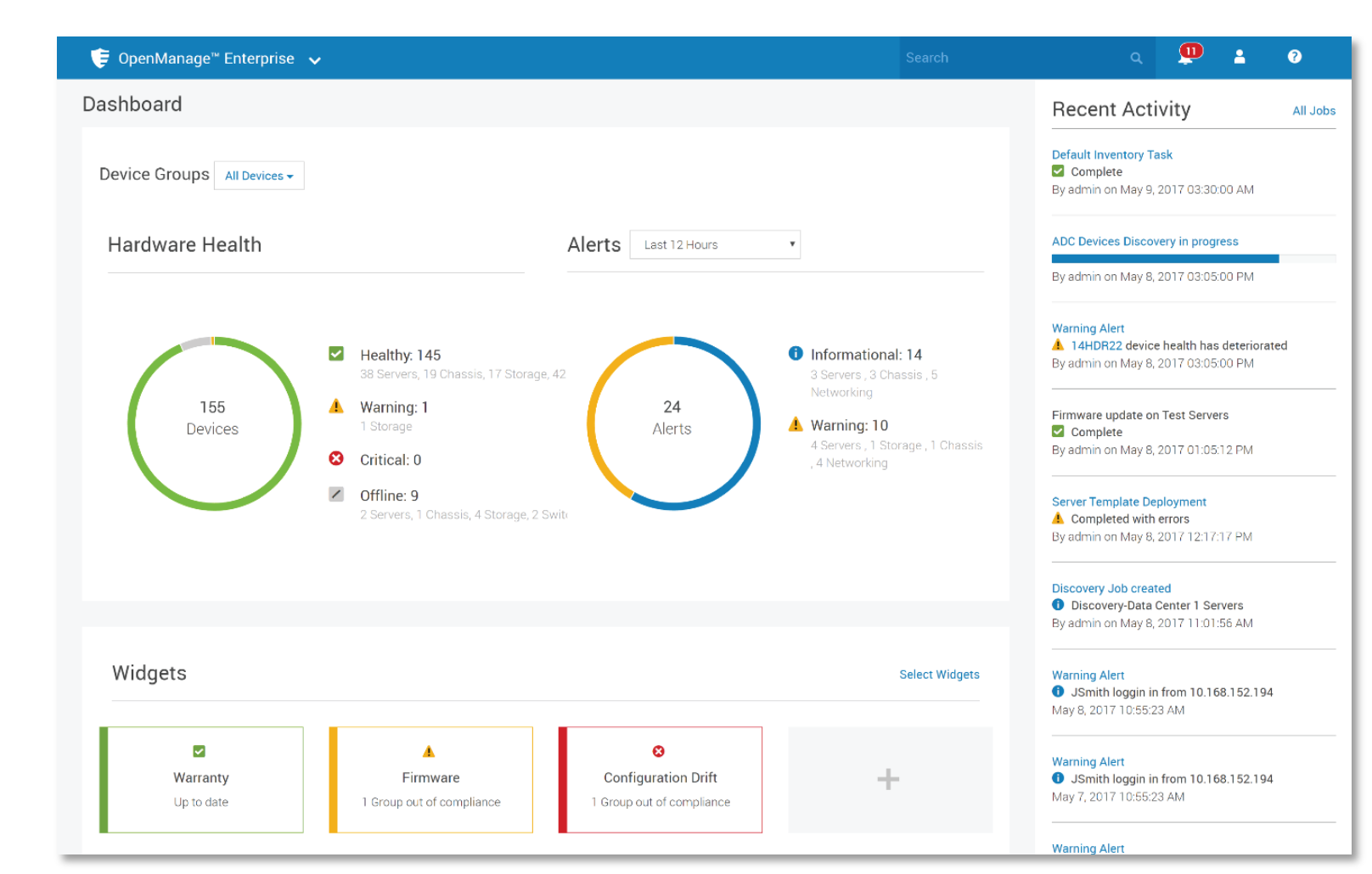 Conclusion: OpenManage Enterprise and the new iDRAC 9 are a big deal and exactly aligned with Dell EMC’s ambition of fully automating the data center to make it ready for today’s consumption based model of enterprise IT.

Of course, the private part of Dell EMC’s hybrid cloud is all hosted on Dell EMC’s own VxRail and VxRack hyperconverged systems. Chad Sakac, Presendent of Dell EMC’s hyperconverged business unit describes VxRail as the Easy Button for cloud and also end user computing infrastructure, because customers can order their infrastructure stack with IaaS (vRealize Automation), PaaS (Pivotal) or VDI (VMware Workspace ONE) pre-configured. Developer Ready Infrastructure and VDI Complete respectively target the deployment and management headaches of the stacks they deliver. Key is that the new OpenManage Enterprise and VxRail manager will now play together, so that server configuration changes are automatically harmonized with the specific setup requirements of VxRail. In short, even if you don’t know about VxRail, OpenManage Enterprise will automatically product configuration items that are critical for VxRail. 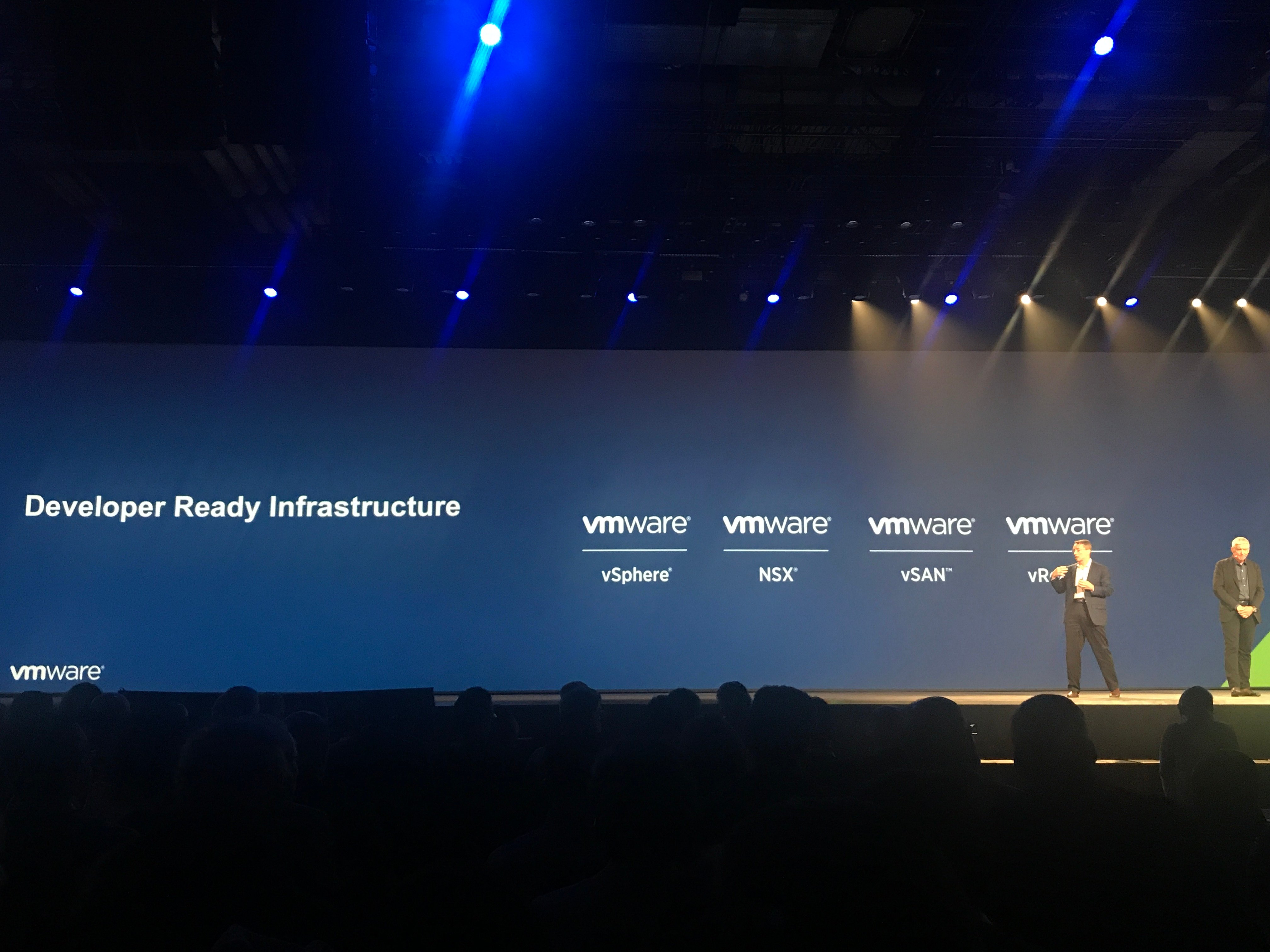 Dell EMC announced CloudFlex Pricing for VxRail, aiming to enable customers to achieve public cloud economics in their own data center. When more capacity is needed, customers can order and pay for new appliances on a subscription basis, with a 12-month minimum contractual duration. Ultimately, the success of public cloud was rooted in infrastructure and platform services that were easily available through APIs and consumable in small increments without contractual obligations. In other words, in order to make CloudFlex Pricing for VxRail successful Dell EMC must convince developers that VxRail with vRealize, Pivotal and ultimately Boomi API integration on top is as flexible and easy to use as AWS and Azure. And while Pivotal CloudFoundry has had some recent success, the platform is still far away from being established as a universally accepted standard.

VMware vRealize Automation is now able to deploy VMs to Virtustream. Initially, customers will find this interesting for data protection and high availability use cases for business critical applications. This option of easily moving apps to a "bullet proof" cloud will impress many customers and should give Virtustream another boost. 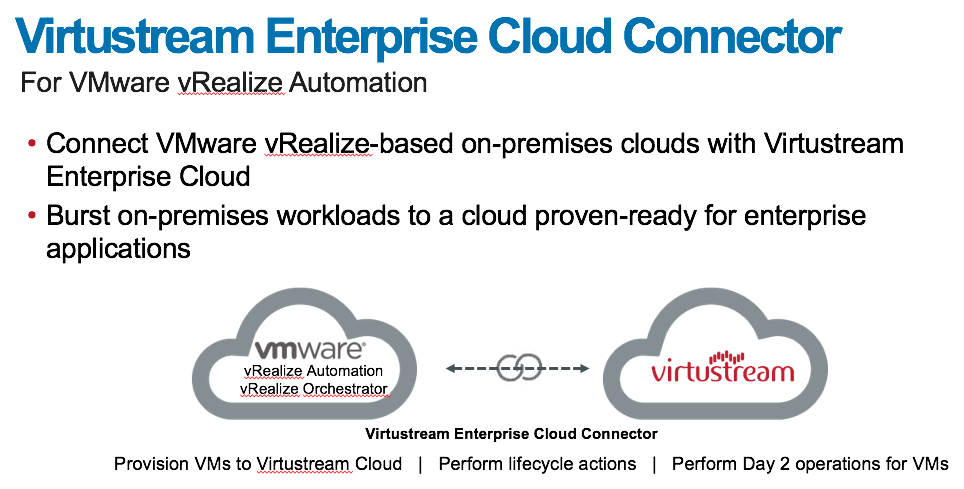 HIPAA compliance is an important requirements for any enterprise directly or indirectly dealing with the healthcare sector. Therefore, receiving access to a turn-key cloud solution with HIPAA built-in (processes, configuration, support, security) alleviates a major headache for many healthcare companies, consulting firms and service providers.

So what did I think of Dell EMC World 2017? As you can see below, the positives vastly outweighed the negatives and my post from the day before the show stands correct. It's what I was hoping for when I wrote that post, but I'm still impressed that many of my initial concerns were so clearly and convincingly addressed: